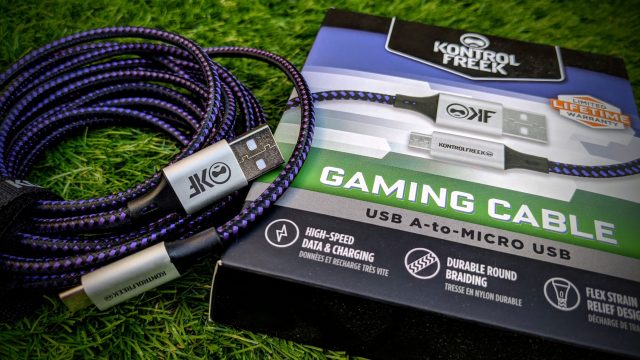 So you’ve got the console, you’ve got the controller, and you’ve got the games. In fact, chances are you’ve also got the headset, the gaming chair, and the thumbsticks. Thought you had the lot? Think again, because KontrolFreek are here with more accessories in the form of their Gaming Cable, allowing you to add your own style to the humble play and charge procedure you never normally think anything of.

The KontrolFreek Gaming Cable does pretty much as it says on the tin. No fuss, no bother. Working with a standard USB-A end and running through to Micro-USB, this 12ft (3.6m) cable lets you get your charging and data sending activities done in style.

Weighing in at 117 grams, the KontrolFreek Gaming Cable is a hefty old product, much weightier than the standard cables you’ll find bundled with the likes of your mobile phone for instance. That is proven when we look at other products for comparison’s sake – my usual go-to cable weighs less than half that. However, that’s not necessarily a bad thing as it really does feel a quality product, allowing for a rather significant upgrade on what you’re already using.

Purple and black in colour, the durable round braiding ensures that this cable is pretty much impossible to tangle up, always ready for use when the time comes. And that time may well arrive fairly frequently too, as your long gaming sessions see your Xbox controller supping juice like it’s going out of fashion. A quick connection to your Xbox One console via the silver KontrolFreek-branded USB-A, and then plugging the other Micro-USB end into your controller will let you continue playing on forever more. And should you not want to use this for charging your favourite Xbox controller, you could instead make the most of it to power anything that runs the Micro-USB route; phones, headsets, torches, anything really.

The 12ft length is pretty much perfect for all occasions too; rarely will you ever really find yourself gaming at a distance larger than that. And if you do? Well, move closer to your screen.

To seal the deal on the KontrolFreek Gaming Cable is the fact that this has been created to allow for a certain degree of flex, with built-in strain relief meaning that even when you find yourself rage quitting for the hundredth time, your controller should just about stay safe. Of course, running a wireless route when the anger rises is probably a better way of ensuring safety, but when the time calls for it this Gaming Cable will have you covered. The other option is to not let the delightful online communities get the better of you, but then we’ve all been in that one situation…

So what else is there to really say about the KontrolFreek Gaming Cable? Well, not a lot really: it’s a cable that lets you keep gaming; very much as its name suggests. And it does that job brilliantly. Being extremely picky though, it’s strange to see that the KontrolFreek logo on the Micro-USB end doesn’t show when it is attached to your controller, but maybe that is more to do with the orientation of the port on the Xbox wireless controller. And further to that, perhaps the price is a little high for what it is.

However, you shouldn’t be mistaken in thinking that this is just your usual run-of-the-mill throw-away cable. What KontrolFreek have created is a quality cable that will last you for years, safe in the knowledge that you’ll be able to continue gaming for as long as it’s required. Or at least until that horrible little Micro-USB is finally properly overthrown by the new USB-C king.

Massive thanks go out to KontrolFreek for sending over their Gaming Cable. If you wish to pick one up for yourself, hit up KontrolFreek direct. You’ll find it available for $19.99.