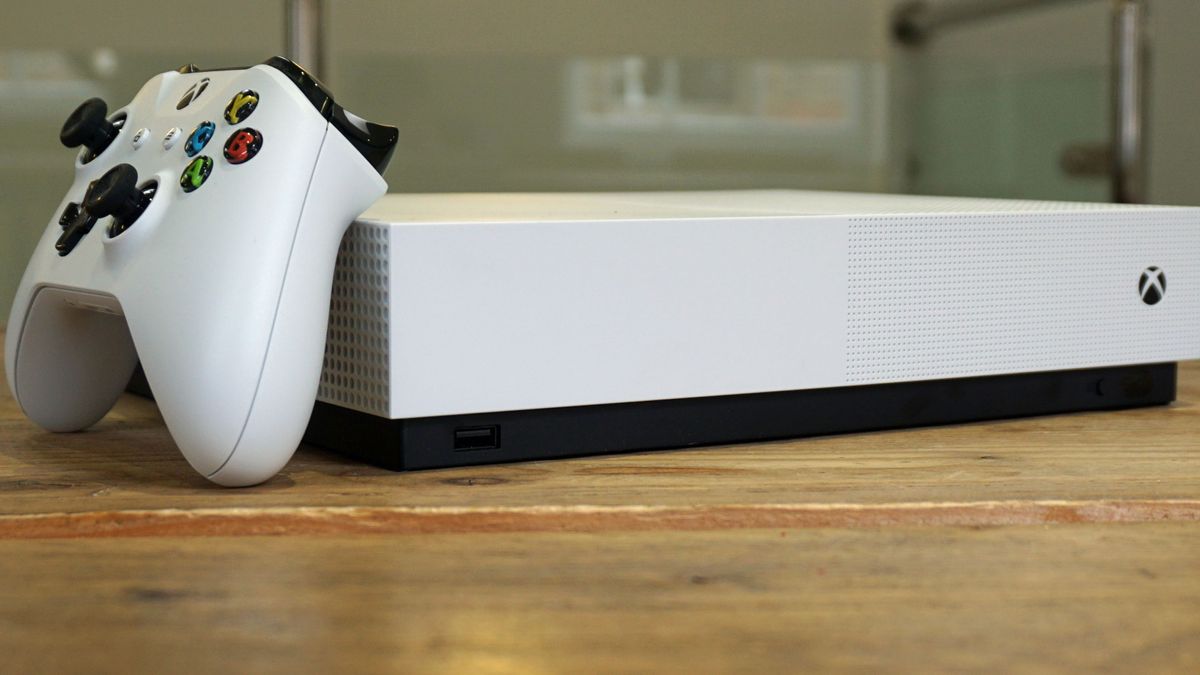 The Xbox One S All-Digital is Microsoft’s first disc-less console and while it marks a shift for consoles in general, it hasn’t come as a huge surprise given the rise in digital downloads and online streaming has radically changed how we consume film, TV, entertainment and games.

Rather than trying to compete with Microsoft’s more powerful Xbox One X, the Xbox One S All-Digital is essentially a streamlined alternative to the Xbox One S.  As far as their design, performance and game libraries are concerned, the One S and the All-Digital are practically the same consoles. The main difference between them is that the All-Digital model doesn’t have a disc-drive and can’t, therefore, play games or movies from physical discs.

If you’re the kind of person who enjoys looking through their physical game collection to pick their next adventure or simply reminisce, then the All-Digital’s minimalist approach probably won’t suit you. If, however, you’re looking to drop physical media from your life to go down a simpler—and potentially more convenient—route then it could hold some appeal.  Before you make your final decision, let our review take you through the pros and cons that ought to be considered before you invest in Microsoft’s all-digital offering.

The Xbox One S All-Digital Edition’s design is the exact same as that of the Xbox One S – except it doesn’t have a disc-drive.

The sleek console is conveniently compact, measuring just 11.6 x 8.9 x 2.5 inches (L x W x D) despite its 1TB hard drive and lack of power supply pack. That makes it just a few inches smaller than the Xbox One S.

There is one physical button for power on the face of the console as well as a USB 3.0.  Around the back, you’ll find an HDMI In port that allows you to pass in a cable box, an HDMI Out, two USB 3.0s, and S/PDIF and Ethernet ports. There’s an IR blaster on the front of the console that allows you to turn on other devices, like your TV, audio/video receiver, and cable/satellite box.

However if you like your consoles in loud color schemes – or anything other than white – you’re out of luck. Like the Xbox One S, Microsoft’s Xbox Design Lab program only allows you to to customize the color of your controllers, so when it comes to the console itself you’re limited to white.

Again like the Xbox One S, the All-Digital boasts 4K resolution – but that’s upscaled 4K, not native 4K like the Xbox One X. You’ll notice a few more details with the latter, but the former still proves pretty capable here.

For example, while playing Forza Horizon 3, we had no issue with dropped frames interrupting our experience, but there’s no doubt the game looks better – and runs smoother – on the X.

So far, Netflix, Amazon Video, YouTube and US-exclusives Vudu and Hulu all have 4K versions of their apps available on the Xbox One Store, which should cover most of your streaming needs – and you’ll need it without the built-in Blu-ray player.

We had no issue with the All-Digital when it came to streaming shows, downloading games/apps or general functionality. The console doesn’t take up much room and doesn’t sound like an air plane taking off when its running, while the 1TB hard drive allows you to download plenty of games (but we’ll get to that a bit later).

Here’s where the Xbox One S All-Digital Edition will divide players. As the console doesn’t have a disc-drive, you can’t use physical games with it – at all.

So what are your options? For a start, the console comes with three digital codes: Forza Horizon 3, Sea of Thieves and Minecraft. While getting three games straight off the bat is great, arguably Microsoft could have included some newer titles – maybe Forza Horizon 4 instead of 3, for example. Still, Minecraft and Sea of Thieves are still quite popular and all games are family friendly.

Outside of these three games, you can either buy digital versions of Xbox games from the Microsoft Store or take advantage of Xbox Game Pass. We found the Xbox One S All-Digital to be a great companion for Game Pass, with plenty of room to download titles at your will from the services library of over 200 games – including old and new.

Even better, for the last month, Microsoft has been running a deal which gives you one month of the new Xbox Game Pass Ultimate service for $1 / £1 instead of the standard $14.99 / £10.99.

When the Xbox One S arrived three years on from the original Xbox One, it offered smaller, quieter, higher-quality gaming machine. It soon became the de facto Xbox system. But since then we’ve seen the release of the powerhouse Xbox One X console, which offers 4K HDR gaming and the most premium gaming experience on a console (until the release of Xbox Series X next year).

That’s why it’s surprising that Microsoft has chosen to release a disc-less version of the S, which is essentially the same console but without a disc drive. The look is the same, the performance is the same and there’s nothing that particularly makes it stand out from the pack. The draw of the original S is that it provides a cheaper Xbox alternative to the X and works for those who don’t necessary have a 4K compatible screen. However, the All-Digital takes the same console and makes it a tad simpler.

For those who love the idea of disc-less gaming then the All-Digital may be prove appealing, but the issue we had was with the price. While Microsoft is claiming the All-Digital ($249 / £199) is cheaper than the Xbox One S ($299 MSRP / £249 RRP), in reality you can pick up an Xbox One S bundle for around the same price from certain retailers.

For example, at the time of writing, over on our Xbox One deals (UK) page you could pick up a purple 1TB Xbox One S bundled with Fortnite DLC, Tekken 7 and Project Cars 2 for just £209 at Currys. And it’s not a rare sight to see the console on its own go for around £190. Over on the Xbox One deals (USA) guide you’ll find highlights from just $199 including either Minecraft or Battlefield V.

Report: Blizzard Knew Warcraft 3 Was a Mess and Launched It Anyway
New Leak Shows Metro Prime 4 Studio Behind Canceled Legend Of Zelda Game Starring Sheik
Battlefield Portal Allows You to Build the Battlefield Experience of Your Dreams
Lost in Random Puts Your Fate in the Spindly Arms of a Walking Dice Companion in September
Cris Tales Review