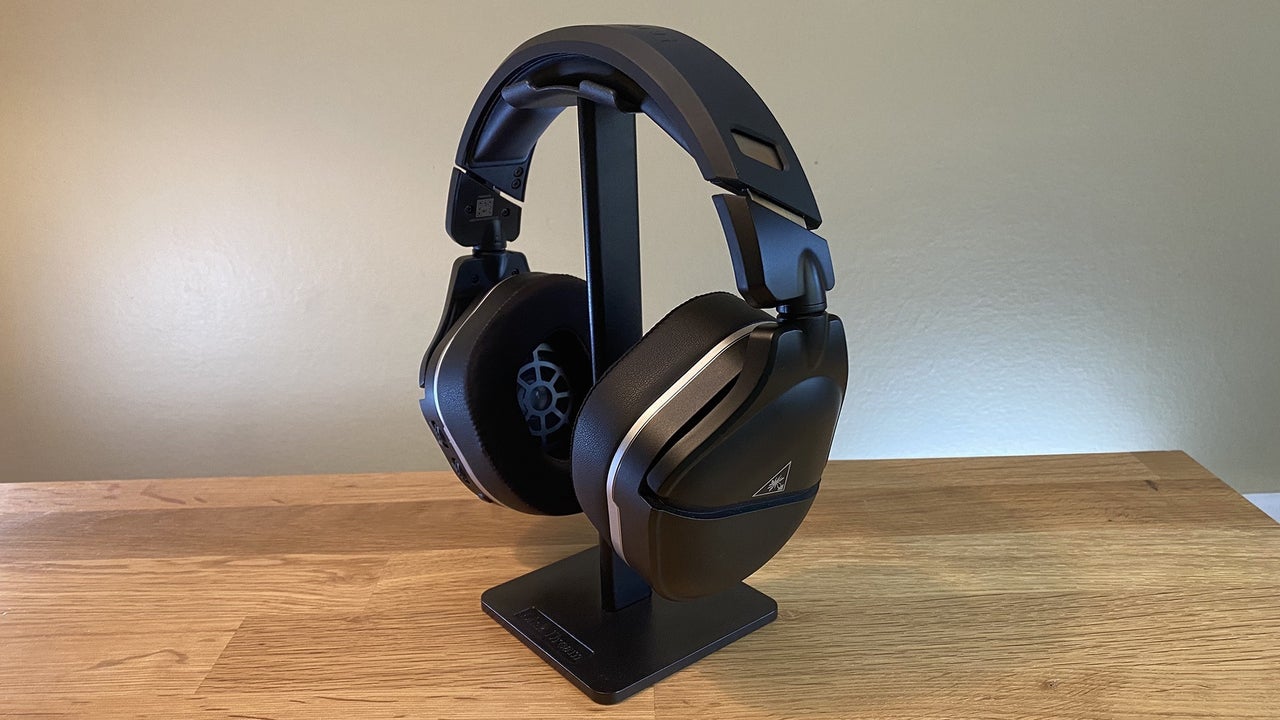 Xbox Series X and Series S, a brand-new revision of its high-end wireless gaming headset, marks a huge upgrade over the original model. It improves upon some of the original’s least successful specs, like battery life, while refining its physical design that looks and feels like a premium headset. Like its less expensive cousin, the Stealth 600 Gen 2, the Stealth 700 Gen 2 is not the pinnacle of high fidelity audio, but it is Turtle Beach’s best headset to date by a long shot.

The top band is made of plastic with a steel frame, which becomes visible when you adjust the cans. Like the Stealth 600 Gen 2, the band lines up with the front of the cans, rather than the center, which can make it feel like you’re putting the gaming headset on backward when you wear them the first time. You may also notice the issue when rotating the Stealth 700 Gen 2’s earcups on their hinges, which allow the cups to lie flat on your chest or on a table.

One of the big advantages of the Stealth 700 Gen 2 – over both its predecessor and the Stealth 600 Gen 2 – is comfort. The entire headset is slightly larger than its budget-friendly counterpart, but there’s an outsized difference in the earcups, where it counts. The cups feel like they conform to the shape of your ears, but also feel quite roomy. The cups also feature a thick layer of cooling memory foam padding, coated with leatherette on the sides and a smooth mesh over the front. Normally, mesh covering on earcups is a red flag for me – it’s often scratchy and heats up quickly: The Stealth 700 Gen 2 only started to feel hot after long gameplay sessions, which I found impressive.

And thanks to a much longer-lasting battery, you can wear the Stealth 700 Gen 2 through lots of long gameplay sessions. According to Turtle Beach, the Stealth 700 Gen 2 should last through 20 hours on a single charge, up from just 10 hours per charge on the original. Anecdotally, I found the headset lasted through about three days of regular use on average, even when regularly pairing and unpairing with my smartphone. A 20-hour charge is on the high side of average for a gaming headset, but that should be more than enough for most players, so long as you keep a charging solution handy to top it off between sessions.

There are a lot of controls stacked along the back edge of the Stealth 700’s left earcup. From top to bottom, you have: Two volume wheels, one for speaker volume and one for chat. A “mode” button to toggle Superhuman hearing, Turtle Beach’s performance audio mode, a power button, Bluetooth and Xbox protocol pairing buttons, and a USB-C port for charging. You can change the secondary volume wheel and the mode button inputs to adjust other functions using the Turtle Beach Audio Hub app, which is a nice added bit of customization for a console headset.

One of the biggest differences between the Stealth 600 Gen 2 and Stealth 700 Gen 2 is having access to both the Xbox pairing protocol and Bluetooth. Both headsets have the Xbox pairing, which makes syncing your headset with an Xbox extremely convenient. You just press the pairing button on the console, then the button on the headset, and they pair.

Bluetooth greatly expands the headset’s utility. It’s much easier to pair the headset with a PC, and you can pair it with other devices, like your phone. Better yet, you can pair it with a Bluetooth device and an Xbox simultaneously. This allows you to adjust audio levels on the fly while playing, but also lets you listen to a podcast or take a call on your phone while listening to your Xbox audio at the same time. (As someone who likes to put on a podcast while playing some games, this was a huge revelation for me).

The Stealth 700 Gen 2 has a slimmer version of Turtle Beach’s usual built-in microphone. The hard plastic mic is built into the housing of the left earcup, so it sits flush when flipped up into mute position. The flip-down mic is very convenient and easy to use, but can’t really be repositioned. It has a secondary hinge letting you move slightly closer or further from your face, but it’s a far cry from the reshapable wire mics you find from many other manufacturers.

The Turtle Beach Audio Hub app for iOS and Android phones is a modest, but useful configuration app. It allows you to switch among four audio presets, or create a custom balance between bass and treble. It doesn’t give you full EQ level controls, so it isn’t as robust as what you’d find on a PC headset, but it’s more than you get with many console headsets.

Audio Hub also allows you to customize two of the inputs on the headset, the secondary volume wheel and the Mode button. You can also toggle and adjust the level of Superman hearing, Turtle Beach’s performance-focused audio setting and system-level audio prompts. Like the levels, these aren’t groundbreaking features, but access to them is not a given on consoles. And unlike the Stealth 600 Gen 2, you can check and change them on the fly with your phone, which is much more convenient than plugging the headset into your PC whenever you want to make a change.

The Stealth 700 Gen 2 delivers strong overall audio quality. Its 50mm “nanoclear” speakers come through loud and clear and mostly sharp in all kinds of games, competitive and story-driven, including Marvel’s Avengers, Call of Duty: Modern Warfare, and others. Across the board, both music and game sounds came through across the spectrum – low, mid, and high tones. In Star Wars: Squadrons, you can hear and feel the low hum of the ships, and hear the little nuances of blasters and other Star Wars sounds that we’ve all come to know so well over the years.

Weirdly, The Messenger – a platformer with music made to sound like something you’d hear on 8- and 16-bit-style consoles – presented some of the only noticeable audio hiccups. Some complex, high notes in the music would come through scratchy and muddled.

Like the Stealth 600 Gen 2, the Stealth 700 Gen 2 supports virtual 7.1 surround sound through Windows Sonic, and offers a functional, but not particularly rousing virtual surround sound experience. In games like Apex Legends, you can hear directionality of gunfire, footsteps and other sounds, but sounds coming from your side or behind you sometimes sound disproportionately loud. On the Stealth 700 Gen 2 specifically, I noticed that Windows Sonic created compression issues, which led to little pip noises coming out of nowhere every so often. Simply put, most games sound better with it off.

The same goes for Turtle Beach’s performance-minded audio mode, Superhuman Hearing. When paired with surround sound, it emphasizes gameplay-relevant tones, like footsteps, over general gameplay sound. Strangely, it also raises the volume across the board, so everything is very loud. It technically works – the “right” sounds come through more clearly than the rest – but the difference isn’t as significant as I’ve experienced in similar modes from other headsets. More importantly in my mind, the listening experience isn’t as pleasant with Superhuman Hearing on. The volume is too high, and sudden noises pop too aggressively.

In Star Wars: Squadrons, you can feel the low hum of the ships, and hear the little nuances of blasters and other sounds

As with the Stealth 600 Gen 2, I was pleasantly surprised by the quality of the Stealth 700 Gen 2 mic. It comes through loud and clear, even without the ability to make proper adjustments. It tends to pick up outside or background noise, like a fan, air conditioner, or, in one case, a neighbor’s gardener blowing leaves. It paints in broad strokes, but it gets the job done.

The Turtle Beach Stealth 700 Gen 2 for Xbox is available now for $149.99 through Turtle Beach’s website, Amazon, and other digital retailers.