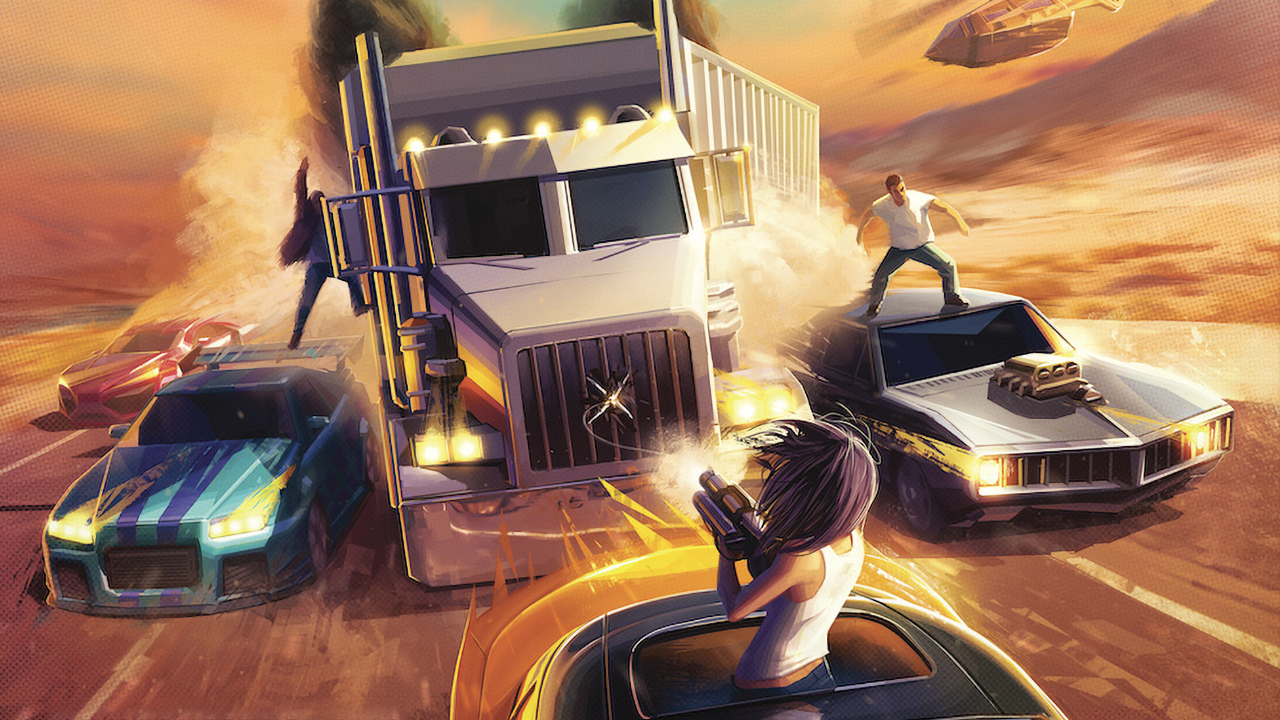 For a franchise that’s spawned nine mainline films, plus spin-offs, with more in development, it’s a shock there aren’t more Fast & Furious board games. After all, you’d think the series’ blend of visual thrills and (literally) high octane action would be a great fit for the medium. Well, the wait for a new Fast & Furious boardgame experience is over with Fast & Furious: Highway Heist from Funko Games.

This co-operative game lets you take the role of characters from the series, like Dominic or Letty, and work together to win one of three scenarios, all of which recreate climatic chase scenes from the movies. There’s the truck heist from the first Fast & the Furious movie, the tank takedown from the sixth, and the helicopter sequence from the seventh.

Box and What’s Inside

Highway Heist was designed by Prospero Hall, a tabletop design team who’ve made a big splash with acclaimed games set in popular franchises like Jaws and Disney Villainous. Like most of their titles, opening the box greets you with a quote to set the scene: “doesn’t matter what’s under the hood. What matters … is who’s behind the wheel”.

Beneath the board there’s a tray full of colourful plastic miniatures: cars, enemy SUV’s and the three big boss vehicles, one for each scenario. While serviceable enough, these are soft plastic and lack detail. Each piece has two holes in the top to fit pegs that represent someone standing atop the vehicle, so they’re not well suited for painting.

The choice of art is interesting. Rather than stills from the films, the Fast & the Furious board game offers blurry faux-impressionist pictures in a post-apocalyptic style. While not the most obvious pick it’s very effective, creating a sense of speed and mimicking a certain car-heavy Australian film franchise.

Rules and How to Play

For a game with the potential for mass-market sales, Highway Heist requires a decent chunk of rules digestion before you can put your foot down. If you’re familiar with modern board games it won’t be a struggle but to friends who prefer hardtop to tabletop may find the number of options a little confusing.

Aside from that, setup is nice and quick. The group picks a scenario to play and each player chooses a character and a car. Some combinations are better suited to particular scenarios. Then you put the big bad – tank, trailer or helicopter – in the middle of the road, surrounded by four enemy SUV’s, and get your engines revving.

You put the big bad – tank, trailer or helicopter – in the middle of the road, surrounded by four enemy SUV’s, and get your engines revving.

On a turn, each player gets to take two actions. Some of these, like Drive and Leap, are automatic. Most, such as Force, which lets you push enemy vehicles around, require a roll of some custom six-sided dice with a mix of blank, nitro, and empty faces. You check what stat it requires, like Speed or Control, then total up the pool from your chosen character and car. The action requires a certain number of green success dots to succeed, else it’s wasted.

Dice-based cooperative games can be frustrating when things don’t go your way. But in Highway Heist you often end up rolling twice per turn, per player, so luck tends to even out.

Plus, any dice that come up with Nitro symbols offer you a tactical choice: discard them, or burn one of a limited stock of matching tokens to turn them into successes. It’s a slick combination, delivering tension for the big rolls while rarely leaving you feeling out of control.

After your turn, you roll another die to see what the enemy figures do. Sometimes opposing SUV’s will ram your cars, or their passengers will leap on your roof to cause havoc. Often, though, you’ll have to draw from a scenario-specific enemy deck of more detailed events. These cause the big scenario foe, and sometimes other enemies, to move and attack. The tank might shell or crush the player cars, the helicopter unleash a rocket and so on.

They also push down toward an “activation” space for an extra-negative effect if you don’t anticipate and plan to prevent them. The “Cargo Thieves” card in the truck heist, for example, places enemy pegs atop your cars who, if not dealt with in time, will steal back some of the loot you’ve managed to gain.

Even with only two actions and enemy activation, Fast & Furious: Highway Heist creates a great sense of kinetic energy and motion. Cars jostle for position on the road, player and enemy pegs alike climb on roofs and jump about. In a smart design choice, motion is relative: rather than moving lots of spaces on a huge board, there’s a presumption of high velocity. The constant bustle on the board gives it the sense of speed it needs.

Adding to the chaos are the stunt cards that move along the bottom of the board. These are special actions that require you to set up particular placements on the board and a successful dice roll to pull off. The reward is an extra Nitro token and a big step toward your scenario goals. However, they’re also a timer. A new stunt gets added to the board each turn, increasing through three levels of difficulty, and an old one is removed. The last, hardest stunt is an instant win if you can pull it off. But if it shuffles off the board, it’s game over.

The stunt mechanic is a bit of a double-edged sword. While it adds strategy and stand-out moments to the fun, some of the cards are super-specific and very hard to complete with only two players. Highway Heist works better with three or the full complement of four. Most of the stunts aren’t actually from the movies, either, but straight from the imaginations of the designers.

The last, hardest stunt is an instant win if you can pull it off. But if it shuffles off the board, it’s game over.

You can adjust the toughness by removing more stunt cards to make it harder. And a good thing, too, as the standard difficult setting feels a bit too easy. A good cooperative game needs to set the players a challenge they can aspire to. Married to the limited roster of three scenarios, it does pose a question about the long term replay value of the game.

But while it’s on your table, Highway Heist is a thrilling ride, its moving pieces locking into a satisfying whole. The list of actions and stunt cards give you plenty to think about. The way stunts count down and enemy cards count up winds the tension without remorse. And the dice rolls and Nitro boosts help you feel like you’re always in with a shot right up to the finish line.

Fast & Furious: Highway Heist has a list price of $29.99 and can be ordered directly from Funko Games or other online retailers in the US, as well as in-person at your local game store.

Madden NFL 22 Scouting Feature Details Revealed During Latest EA Play Live Spotlight
Valve claims the Steam Deck can handle any game you throw at it, including AAAs
Several key staff who worked on Borderlands have started their own independent project
Pokemon Unite now available for pre-load on Nintendo Switch ahead of tomorrow’s launch
Share of the Week: Ghost of Tsushima – One Year Anniversary