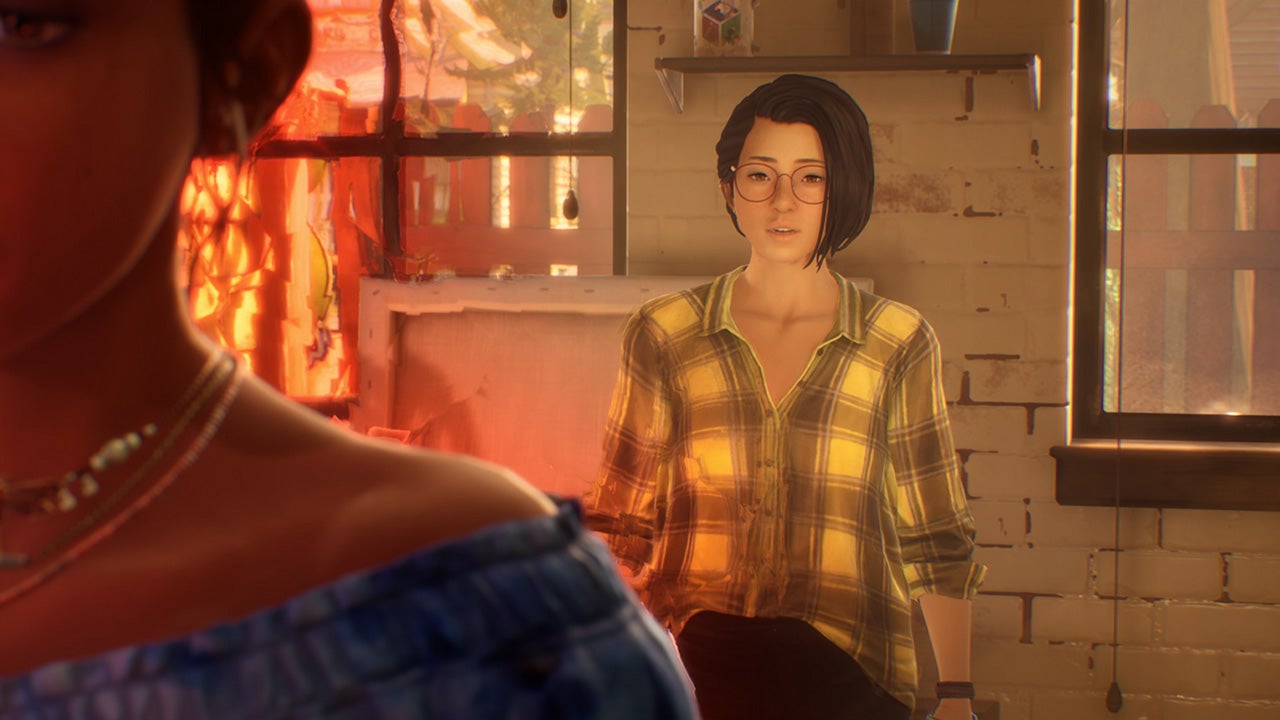 Life is Strange: True Colors has kept me more emotionally invested than any Life is Strange story since I played the original back in 2015. While every game in this adventure series is good in its own way, this one (from developer Deck Nine as opposed to the series’ creators at Dontnod) addresses many consistent issues that have plagued the last three games. It proves to be the best in the series thanks to consistent writing for both main and side characters, a compelling mystery story with good pacing, useful supernatural abilities, and perhaps most importantly, dialogue choices that offer more depth and complexity with big and most small decisions that actually impact the story in meaningful ways throughout the course of five chapters.

While you can certainly play each chapter in bits and pieces, they’re all available immediately so you can binge its 14 hours of story in one sitting with no waiting. Every episode has good pacing, a clear goal, and plenty of suspense. Before writing this review, I played through True Colors multiple times and found no definitive way to experience the story. There’s a notable difference from previous episodes in that there is no recap of the previous chapter when starting a new one or a teaser for the next after completing one, but in its defense, True Colors does not really need it.

You play as Alex Chen, a young woman with a troubled childhood who comes to the fictional mining town of Haven Springs, Colorado to live with her brother Gabe. After a mysterious accident, Alex uses her supernatural empathic abilities to bring the town’s secrets to the surface. Personally, I wish that the trailers hadn’t spoiled the nature of the central mystery for me, so if you haven’t watched them yet, don’t – I urge you to go in blind.

Haven Springs is stunning thanks to its scenic Colorado views. From the snowy mountains in the far background to the wooden bridge that separates the bus stop from the main street filled with colorful flowers and a river stream, this is arguably the best setting in any Life is Strange game to date and a compelling and effective tourism ad for Colorado.

This is a small mountain town, and in typical small-town fashion, everyone knows their neighbors and their community is tight-knit. It comes across loud and clear that the residents genuinely care about each other. Some of this insight comes from Alex’s phone, which shares details of her relationships with her friends with some text messages (the content of which varies depending on your in-game choices). Alex can also check out MyBlock, a Nextdoor-like social media platform where the townsfolk share local updates, Easter eggs, and local banter; some of which are pay-offs as a result of the choices Alex made around those characters. There’s even a moment in which the entire town partakes in a LARP to cheer up a grieving kid. Seeing the townsfolk dress up in costumes in areas like the town’s bar was by far my favorite moment of the entire story. There’s even a light RPG element in that particular chapter that helps make the entire section a lot more fun to engage in.

The people of Haven Springs also have a lot of life to them, which made me feel more emotionally invested in the community. Previous Life is Strange games have struggled with consistently giving NPCs compelling backstories and many of them were failed by poor writing. Alyssa Anderson in the original Life is Strange, Evan Harris in Before the Storm, Hank Stamper in the first episode of Life is Strange 2 all had a lack of depth that made them come off as stereotypes. But in True Colors, I can’t name anybody who felt underserved.

A lot of that comes from the excellent way in which you interact with them, which is enhanced by a supernatural phenomenon. Like Max Caufield in the original Life is Strange, Alex has an unexplained superpower: she can perceive strong emotions through colorful auras that outline people around her. It may not be as spectacular as turning back time, but it does go beyond just “reading” people: if a person’s feelings are strong enough, Alex will also begin to actually feel those emotions herself. It’s almost like an out-of-body experience where she walks a mile in their shoes.

In some cases, both scripted and unscripted, Alex can interact with items that contain memories (basically audio logs) that share a bit more about certain characters. I found this to be a nice add-on to Alex’s already robust empathic powers; not only can it help with dialogue choices big and small, it helps to add more perspective to Haven Springs’ residents. In one instance after exploring the flower shop, I found a t-shirt memory that explained how Riley Lethe met her on-and-off-again boyfriend Mac Louden at a bot-fighting competition she participated in. And if you decide to go off the beaten path, you will be rewarded with an additional backstory for certain characters that Alex will write in her journal. Her journal feels very much like her and offers insight into the character you’re playing as – sometimes she will write new lyrics or share extensive detail on when she engages in another’s strong emotions; you can even playback the optional memories you find.

One of my favorite aspects of Deck Nine’s handling of Life is Strange’s story-driven format is that, unlike previous games in this series, there are so many choices – regardless of size – that impact Alex’s journey and future. One example of True Colors maintains throughout the story involves a side plot with Eleanor Lethe who early on in the game you find out she is having health issues, in particular, she is suffering from memory loss. But no one in town, not even Riley, who sees Eleanor is a material figure knows of her illness. At one point late in the story just as Riley is about to leave for college, you can tell her about Eleanor’s condition, but having previous conversations with both will leave you with the choice of whether to be honest and tell Riley the truth and risk violating Eleanor’s trust or keep the secret and allow Riley to go away to school. Those consequences and reactions feel real and consistent thanks to the detailed facial animations and appropriate body language of NPCs. Sure, some of those reactions are emphasized and spelled out when an aura appears, but even without the aura I always had a good understanding of how a character was feeling after Alex interacted with them.

Because of the increased emphasis on the consequences of our actions, there were many times when I made a choice and had to second-guess whether that was what I wanted to do. No other Life is Strange game has made me reload a checkpoint save just to see a cutscene play out differently. There were times in previous games when I felt the writers would have dialogue options, you could have multiple options for a dialogue choice that is consistent with the overall protagonist, but another option felt “forced” or out of place. But Deck Nine’s superb writing offers multiple dialogue options that all feel like something Alex would say and remain consistent with her personality.

By the time you get to Chapter 5, the effects of most of the choices you’ve made will play out in one way or another. It was a lovely surprise to see just how many decisions I made in earlier episodes metamorphosed into my own personal-feeling version of Chapter 5. Life is Strange has always been a series with high replayability, but this level of detail and variation in scenes makes True Colors even more rewarding for me to replay again and again.

Like the previous installments, Life is Strange: True Colors has multiple endings that can result from the choices you make, none of which is a canonically “true ending.” While I initially thought I had a good idea of how the story would go, Deck Nine managed to keep me guessing – and by the time the plot twist came I was left in disbelief, eager to see how the final parts would play out. Yet each ending – and their variations – all felt natural to Alex, and she remained true to the character of someone who is happy and hopeful for the future that lay ahead.

I also loved that even when Alex solves the main mystery, there are still plenty of secrets for her to discover around Haven Springs. The seeds of these side stories are planted through clever foreshadowing and hints for the curious among us, and their revelations always felt rewarding to me. There are even optional stories that happen in each episode where Alex can use her abilities to help people, such as helping a man guess how many jelly beans are in a jar so he can win the $100 gift card to take his mom out to a nice meal, boosting a runner’s self-esteem, or helping pair up a couple of friends with a mutual attraction to one another but were too scared to make a move. Even among the core cast of characters, in my first few playthroughs, there was always something new I could learn about them that allowed me the opportunity to form a better bond with them.

Here’s what we though of the final episode of Life is Strange:

Life Is Strange — Episode 5: Polarized is a fascinating exploration of a teenager deeply affected by loss, trauma, suffering, and failure. This is not the coming-of-age story Life Is Strange pretended to be early on, though. Polarized is destructive, unquestionably the bleak climax of the murder mystery that’s been dormant during most episodes, and it only somewhat works by the time Max Caulfield arrives to her ending. It’s disappointing to see Life Is Strange lean into its angrier story threads to complete its otherwise-touching human story, but its emotional closure and character resolutions make this a more memorable ending than its unnecessarily dark plot twists. – Mitch Dyer, October 21, 2015

Deck Nine also far outshines Dontnod in the romance department, with two strong options that Alex can pursue in Ryan and Steph. In previous Life is Strange games, especially Dontnod’s (Life is Strange 1 & 2), you had the option to romance either a male or female character and choose the protagonist’s sexuality, but I found those games to have lackluster options. Yes, that decision is a small piece of a much larger puzzle, but when I look back at them, Dontod’s poor writing always offered a strong bias towards one potential partner over the other.

By comparison, Deck Nine offers an equal playing field to both Ryan and Steph, and when I played the first four chapters for the first time I was unsure who I wanted Alex to be with – or whether to choose one of them at all since you’re given the ability to opt-out of romance altogether. Both characters have their pros and cons and it’s quite clear Deck Nine is placing the ball in your court, and neither feels like they are getting the short end of the stick.