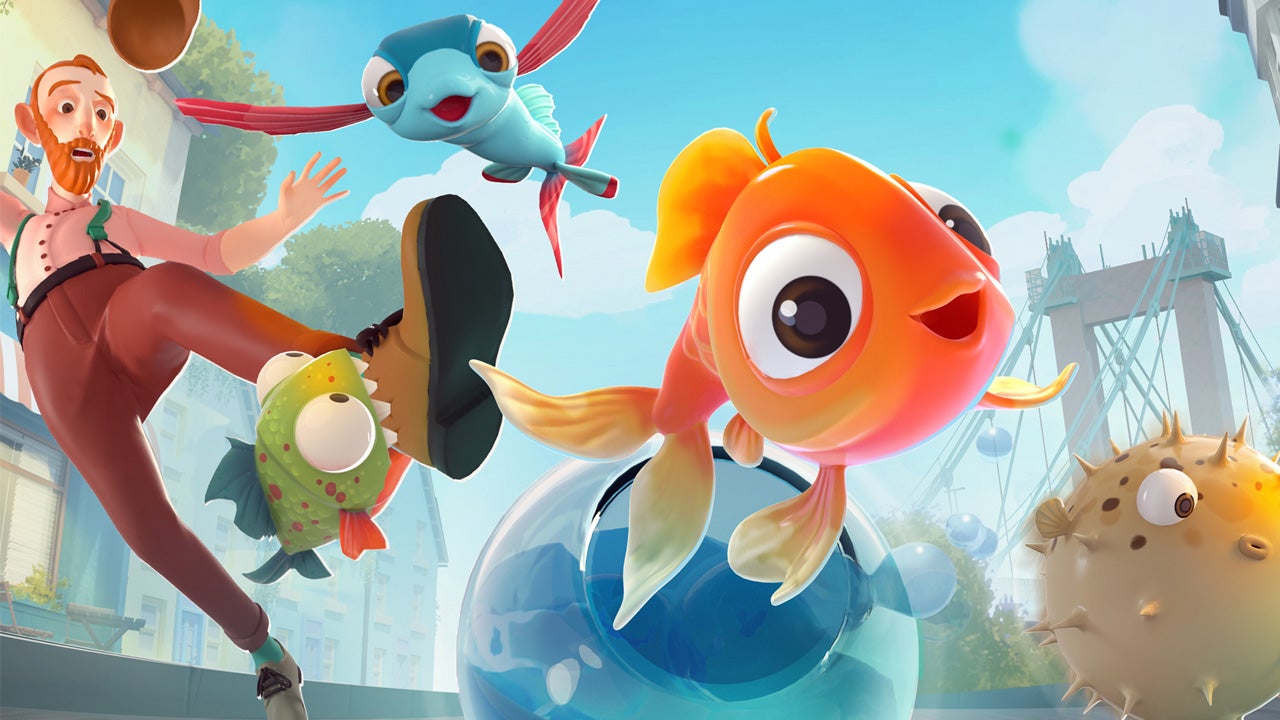 I Am Fish is without a doubt the weirdest game I’ve played this year and appears to have been made by insane people. In other words, I really enjoyed it. It’s an intentionally frustrating physics-based platformer and a literal fish-out-of-water story that challenges you to overcome ridiculous obstacles. Escaping captivity is not always as fair or forgiving as I’d hoped and sometimes can be downright infuriating, but overcoming its preposterous challenges is frequently a thing of beauty. As a glutton for punishment, I found I Am Fish to be a challenging, entertaining ride that had me laughing, cursing at seagulls, and occasionally sobbing uncontrollably on the carpet as I had to restart a section yet again.

This is a bizarre, over-the-top tale of a quartet of fish who eat sentient bread (which you might remember from I Am Bread) which awakens human-like sentience and intelligence in them. Naturally, they use this to wreak havoc on their human overlords and absolutely destroy entire towns, like a nihilistic retelling of Finding Nemo. It’s truly one of the weirdest premises I’ve ever beheld and it kept me laughing and shaking my head in disbelief the whole way through – around 10 hours.

Perhaps weirdest of all is how I Am Fish develops and expands upon the stories from I Am Bread and Surgeon Simulator, giving lots of backstory and exposition to those games in what appears to be an incredibly ill-advised attempt to establish the BGU (Bread Gaming Universe, obviously). And honestly, I’m here for it. The completely absurd attempt to create a cohesive series out of a tongue-in-cheek bread game only adds to the charming stupidity that called to me in the first place.

You should expect to die a lot.

Like I Am Bread before it, the main obstacle you face in I Am Fish is that your playable characters are just really darn difficult to control, yet precision is almost always required. And when you’re constantly under threat from everything, like cars running over you or, oh, I don’t know – coming into contact with air for more than a few seconds, you should expect to die a lot. As I floundered to direct a rolling fishbowl or flopped my way into a body of water, I never felt like I was completely in control of the aquatic animals, which is equal parts annoying and hysterical. If I added up all the times I shouted something like “Oh, give me a break!” at the screen and gave you the number you’d probably think it was my least favorite game ever, but it’s all by design. I cried tears of joy when I finally made it past a particularly annoying section where seagulls were trying to kill me while I rolled around in a glass bottle, and I cracked up as I was repeatedly run over by cars.

I Am Fish has four playable fish, three of which have unique abilities that must be mastered to solve puzzles. The piranha, for example, can bite and destroy just about anything in his path, while the flying fish can, well, fly. The introductory levels for each fish are total highlights, where your new abilities are fresh and puzzles gradually become more challenging as you learn to make the most of your latest set of fins.

There are some really stellar levels, like one where you’re swallowed by a drunk man at a club and have to make him stagger to a bathroom from within his stomach before he barfs you up. Or when you roll your fishbowl over the rooftops of a town using the electrical wiring like guide rails. Figuring out how to think like a fish and overcome absurd obstacles is a completely worthwhile experience, even when you’re dying a ton.

That said, not all the frustration thrown your way is fun; some sections cross that delicate line from being entertainingly annoying to just making me want to turn it off and play something more casual, like Demon’s Souls or Battletoads (1991). The bottle sections in particular just feel downright cheap sometimes, as I found myself wriggling helplessly in a very unwieldy bottle while trying to navigate extremely precise landscapes. In another, I found myself painfully inhibited by my own AI-controlled allies who eagerly followed me wherever I went and constantly got in my way, causing me to die half a hundred times or so.

Parts made me want to turn it off and play something more casual, like Demon’s Souls or Battletoads (1991).

These kinds of extreme and uncalled for frustrations actually made up a not-insignificant amount of my time with I Am Fish, enough for me to develop a kind of love-hate relationship with it. To make matters worse, some sections go way too long without a checkpoint, which forced me to replay parts repeatedly, each time more irritating than the last. It’s unfortunate that it tried so hard to tick me off sometimes, because when things came together I didn’t mind or even notice how much I was dying just because the obstacles thrown at me made me laugh. But I Am Fish pushes those limits pretty regularly and laughter is replaced with deep sighs and stress eating.

I Am Fish Review Screenshots

If the normal controls are somehow not difficult enough for you, there’s also the Bossa control style, which makes you flap the thumbstick around like a fish’s tail in one of the most insane control schemes I’ve ever used. For masochists interested in a swift kick in the pants, this can be pretty entertaining, though I can’t see myself ever wanting to put myself through that kind of agony for longer than a level or two.

I Am Fish isn’t very long, with only 13 levels that I was able to beat in 10 hours or so with a fair amount of goofing off, but there’s quite a bit of replayability to it. Levels are mostly linear, but usually have a few different paths you can use to reach your goal. You can also chase star ratings by finding the fastest route through levels and completing speedruns with as few deaths as possible. Naturally, collectible pieces of bread provide an optional challenge – they’re found on the most difficult or out-of-the-way routes to encourage further pain, if you’re into that sort of thing. Collecting enough pieces of bread and earning higher star ratings also unlocks one bonus level, which makes replaying levels and honing your skills a worthwhile endeavor.